Planning to Join a Bikram Yoga Class? Here’s What You Should Know

Bikram yoga is more popularly known as ‘hot yoga’ mainly because it is performed in a heated room. This type of yoga involves 26 different Hatha yoga postures which are aimed at developing flexibility and strength while at the same time serving as a cardio exercise. Bikram yoga is one of the most physically demanding yoga practices, so it burns a lot of calories. Before you purchase your hot yoga towels and go to the heated room, you might as well get some more information about this practice first to know if this is the right yoga for you.

In Bikram yoga, you will follow a sequence of 26 postures, which are mainly upright postures. These postures can really get your body to work intensively, especially that you will be doing these in a room with a temperature of 105 degrees and 40 percent humidity. Be warned that this level of heat may cause nausea and dizziness. Another thing that makes Bikram different from other types of yoga is that its instructors keep a dialogue instead of demonstrating each of the postures.

How Many Calories Are Burned?

According to yoga experts, a person who weighs 150 pounds can burnt as many as 1,000 calories per session of Bikram yoga. This is the same amount of calories you can burn when you run at 6 mph for an hour and a half.

What Are the Health Benefits of Bikram Yoga?

Many yoga enthusiasts who prefer Bikram yoga claim that it has benefitted them in so many ways in terms of improving their health and wellness. Some even say that it can help reverse Type 2 diabetes. The better known benefits of this kind of yoga are increased muscle strength and flexibility. It is said that the sequence of postures improves health and burns calories by speeding up blood circulation to the organs and muscles which are affected during the postures. Many Bikram lovers also say that it has helped restore the health of their muscles and joints.

Are There Any Dangers?

Any kind of intensive cardio workout comes with risks of nausea and dizziness, and the same thing is true for Bikram yoga. It is for this reason that students need to be made aware of the possible consequences of doing yoga in a heated room.

Yoga students can either bring their own yoga equipment or they could rent one from the studio they are enrolled in. It is recommended, however, that you have your own yoga mat and yoga no slip towel so you could avoid using something that is bacteria-infested. Now Athletics yoga towel is highly recommended for Bikram yoga as it is non-slip and micro-fiber.

Tips to Prevent Your Yoga Mat from Being Too Slippery

Yoga mats are a necessity for anyone who’s making plans of living a healthier lifestyle by regularly doing yoga. There are several different types of yoga mats out there, which are made from a variety of materials, such as polyvinyl chloride or PVC, biodegradable bamboo, natural rubber, and other materials. If you’re wondering what makes these yoga mats different from one another, it’s actually in the quality, particularly the level of traction they provide. To avoid any types of injury, you should equip yourself with an anti-slip yoga mat and a skidless yoga towel.

If you’re bothered by the fact that your yoga mat is too slippery, there are a couple of things you can do:

When it comes to high quality yoga towels, Now Athletics skidless yoga towel is what you need. It is microfiber and extra long, so you may also use it to prevent you yoga mat from becoming very slippery. What you will love about Now Athletics yoga towel is that it’s ultra absorbent and very easy to clean, so you can rest assured that you’re using a germ-free yoga mat. 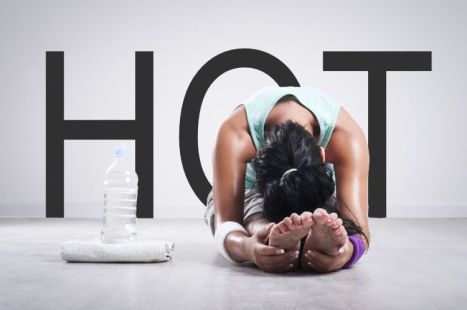 There is no question that hot yoga is very popular today, and this is not only among athletes and celebrities, but ordinary people as well. This is not surprising in any way, considering the numerous health and wellness benefits of this kind of yoga. Listed below are the good things you will get when you grab that yoga towel and get into a heated room:

In hot yoga, it won’t be a requirement for you to perform any contortionist positions. You will be surprised how the heat in the studio will enable your body to be as flexible as it can be. Even if you are a beginner, you will not be intimidated with the poses you need to perform.

The popular Hatha yoga is all about being still in a posture while breathing normally. In hot yoga, you will be in a heated room, so it’s vital that you learn how to breathe properly and deeply. Keep in mind that without proper breathing, it’s almost impossible for you to learn yoga. No need to worry, though, because practice will help you get used to controlled breathing.

By doing hot yoga, you will be using muscles that you never thought existed in you! One of the focuses of this type of yoga is the development of spine strength, which we all know eis key to living a full and healthy life!

Because you are in a heated room, you will sweat really hard, which then results to the detoxification of your organs, muscles, and glands.

According to studies, the heart works as intensely doing yoga postures in a heated room as it does when you are running a mile. What’s amazing is that you don’t even have to leave your mat to achieve this! As a matter of fact, doing a 90 minute class will get your body to burn about 1,000 calories!

In most cases, hot yoga sessions involve two breathing exercises and 26 postures. It works like a routine, actually, and this repetition helps make it easier for anyone to advance their practice. And as you advance, you feel so much more determined and focused.

Hot yoga is considered a form of therapy as well. By doing it regularly, the postures aid in healing prior injuries and can help your body become more resistant to such kinds of injuries in the future.

If you love pushing yourself to the limit, doing hot yoga is definitely good for you! But before you hit the studio, be sure to have your Now Athletics bikram yoga towel so you will feel comfortable after your yoga class. It is easy to clean and highly sweat absorbent!